» The Trust » Our Story » A Major Renovation Project 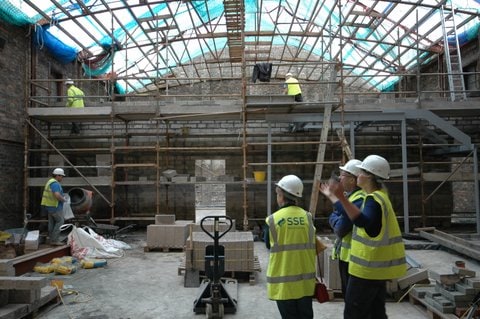 Requiring multiple funders to raise the £1.8 million for the cinema’s renovation, the Friends of The Birks Cinema Board faced many challenges… not least ensuring the total was reached by the end of January 2012 deadline stipulated by the Scottish Government as provider of the SRDP landmark grant.

A concerted campaign of local fundraising events alongside lobbying for grants from national sources ran throughout 2011.

With the considerable support of local MSP John Swinney, enormous effort led to a fantastic outcome… with 5 national funders providing 6-digit contributions to reach the required total. The Big Lottery grant, as large as the SRDP funding, was finally confirmed only a few hours before the SRDP stipulated deadline!

Having already gone to tender for building contractors, Hadden Construction – a well-known Perthshire construction company – was immediately appointed to begin the renovation. They started on site in May 2012.

Major refurbishment of a 72 year old building offers many challenges, most known but others more difficult to foresee. Shallow foundations, single-skin load-bearing walls supported by metal struts, plus extensive use of asbestos and leaded paint all presented their own particular test.

Robin Baker Architects (RBA), our Aberfeldy based architect, produced a brilliant design to faithfully retain the exterior of the iconic 1939 building, but shoe-horned in – in true TARDIS style – a cosy but state-of-the-art 104-seat Auditorium, plus a bright, modern and spacious Café Bar on two levels.

The owner and lead architect of RBA, Robin Baker became the driving force behind both the design and the build.
Critically, Robin became the go-to decision taker and lead manager for the Hadden and other build teams – keeping a firm grip on a very tight timeline for a complicated build.

Robin’s environmentally-friendly design introduced an environmentally friendly cooling system using underground pipes, natural ventilation for the Café Bar and insisted on extraordinary insulation in the auditorium for both sound and heat. So, relax and enjoy your comfortable seat in the cosy auditorium, knowing that great care has been taken to ensure The Birks Cinema building makes minimal impact on its beautiful Tay Valley environment and neighbours and pedestrians are blissfully unaware of the sophisticated sound system exciting your emotions!

Fortune was also on The Friends of The Birks Cinema’s side in the shape of local businessman and volunteer Kevin Ramage who contributed invaluable expertise from having previously supervised the refurbishment of his own premises – Aberfeldy’s popular Watermill Bookshop – another unique local landmark.

Planning and recording progress on both the funding and construction required additional resource – and the Tayside LEADER Project provided funds to recruit a part time finance administrator and hire office space nearby – both invaluable in achieving a successful outcome.

In mid-March 2013, this ambitious project was complete – allowing The Birks Cinema to re-open its doors in time for the important Easter holiday season…

Interesting Fact… in February 2013, The Birks was only the second cinema in the UK to install the sophisticated and recently launched digital projector, which is wall mounted (in a silenced box) at the rear of the auditorium.

« A Community Rallies Around
An Award Winning Relaunch »